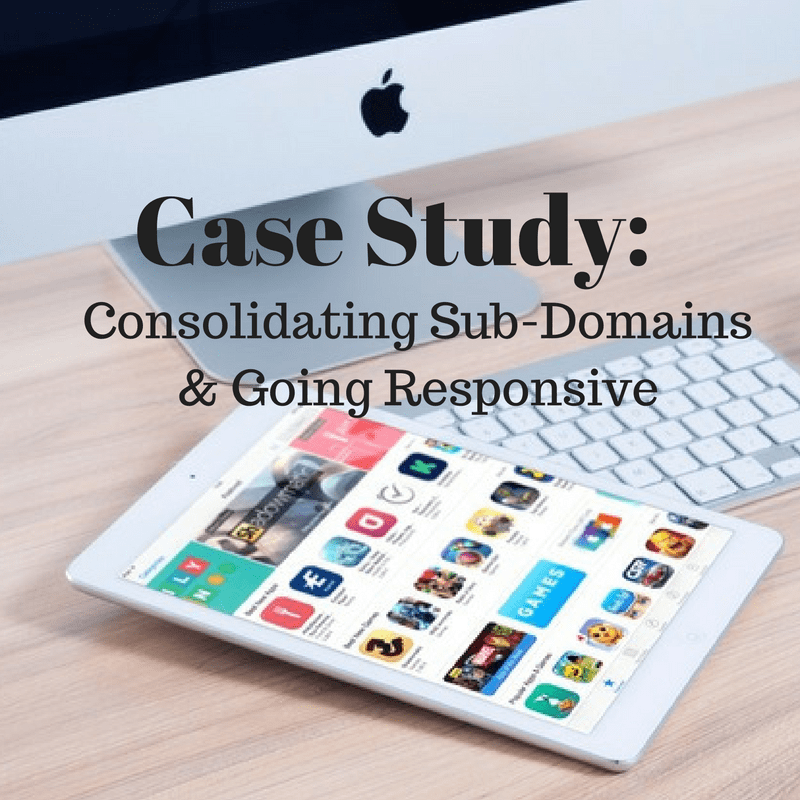 Have you considered making your website responsive, or wondered about the impact it might have on your website’s performance? A lot of businesses still haven’t gone down the responsive web design route yet, or they’re just moving in that direction very slowly and setting it aside as a “one day” project.

Well, two ecommerce sites that I work with had the pleasure of going through both a responsive update and a sub-domain consolidation. We were able to consolidate over fifteen sub-domains for each site and I wanted to share some data on the organic performance of each site because I thought it would be interesting to share.

The Task: Consolidate two ecommerce websites and their sub-domains and make each website responsive.

Hypothesis: Each site will increase their organic traffic, keywords and revenue.

Each of the two commerce sites are relatively similar in size (albeit one is slightly larger with more traffic). Both received the same two updates at different times and in reverse order, so I thought that was an interesting test of implementing these changes and monitoring the performance.

Below are three snapshots on the organic keywords, traffic and revenue for each site over the period of just under a year (October 2015 – September 2016), with notes on when each update took place.

Ecommerce Site 1 went responsive first at the end of December and we consolidated the sub-domains months later during the month of July. After going responsive, we were able to notice a sizable increase in performance from an organic standpoint (both in keywords and revenue), and even moreso when we consolidated sub-domains into the main site.

Traffic didn’t increase as much. But since revenue increased, that’s what I care more about.

Ecommerce Site 2 went responsive just this past month on September 9th, so we’re still not able to tell much from a half month’s worth of data, but I thought the impact made on organic keywords from consolidating sub-domains during the end of July showed some interesting results.

Traffic did perform better after the sub-domain consolidation, however, organic revenue seemed to take a dip after July. Nothing out of the ordinary, but I would have expected at least a little lift. Only time will tell.

My Thoughts on the Outcome:

Both sites so far saw positive results for the most part after consolidating over fifteen sub-domains into the main website. I anticipated that it would have a positive impact after all of the studies out there on consolidating and improving organic performance and my experience launching sites over the years, but you never know how a launch is going to go, so I’m glad it went well and we’re seeing some fairly good results.

I didn’t think the responsive updates would make a major impact overall, and that has yet to be seen over time. I know it will only help for mobile performance, so the sub-domain consolidation has seen the larger impact as expected.

Side Note: I will be publishing a follow up post a month or so down the road on results with some more numbers once the data rolls in.

What results have you experienced?